Dominic (Dominique) Samels was the Father of Franz Samels and my GGGrandfather.  He was born in Luxembourg 20 February, 1799 and died in Aurora Illinois 19 June, 1873.

Dominic Samels married (1) Catharina Schott (1796-1837) and their children were Wilhelm,  Franz (Frank), Maria, Jean, Margaretha and Jakob.  Catharina died in Luxembourg and Dominic married (2) Catherine Muller.  Their children were Peter, William, Susanna, Frank, and John.  This repetition of names (wives Catherina and Catherine, children Peter, William/Wilhelm, Franz/Frank) has caused no end of confusion in sorting out the family order but provides an understanding of  the will’s reading “Frank (the oldest)” as the first listed.  Frank was also the executor of the estate.

Here, then is the text of the will.  I attempted to keep the spellings, capitalizations and word order just as they are in the document, hence some items may be incorrect.

Know all men by these presents that I Domanic Samels of the Town of Aurora Kane County Illinois of the age of about 82 years being of sound mind and memory do hereby make ordain publish and declare this to be my last will and testament: that is to say I give and bequeath to my son Frank (the oldest) One Hundred and fifty Dollars which is in a Note given by my sons William and Peter dated January 14, 1871 together with all interest thereon till paid and also my interest and claim in all cattle, Poultry or other live Stock that I may have on my farm owned by myself and heirs or at any other place, and also my interest and claim that I may have in any personal property or chattels whatever (unreadable) and my real Estate which is Situate in the Town of Blackberry in Kane County Illinois to be disposed of as follows: The entire interest therein to my Son (the oldest) Frank above mentioned by him my said son Frank paying to my oldest son William One Hundred Dollars, my daughter Maria One Hundred Dollars and my daughter Margarethe One Hundred Dollars and hereby make and appoint my said son Frank my executor of this my last will and testament hereby revoking all former wills by me made.  “……..June 14th 1873”

The above instrument was subscribed and executed in our presence and acknowledged to each of us to be his free act and last will and testament. 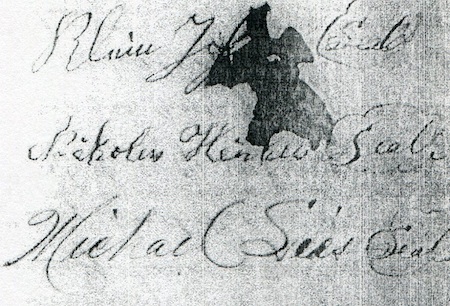 This will was suly proven before me by the subscribing witnesses in open courts.  June 30, 1873.  W. D. Barry, Judge.

Transcript of the will posted with permission of Tom Cook.

This entry was posted in Samels, Wills. Bookmark the permalink.